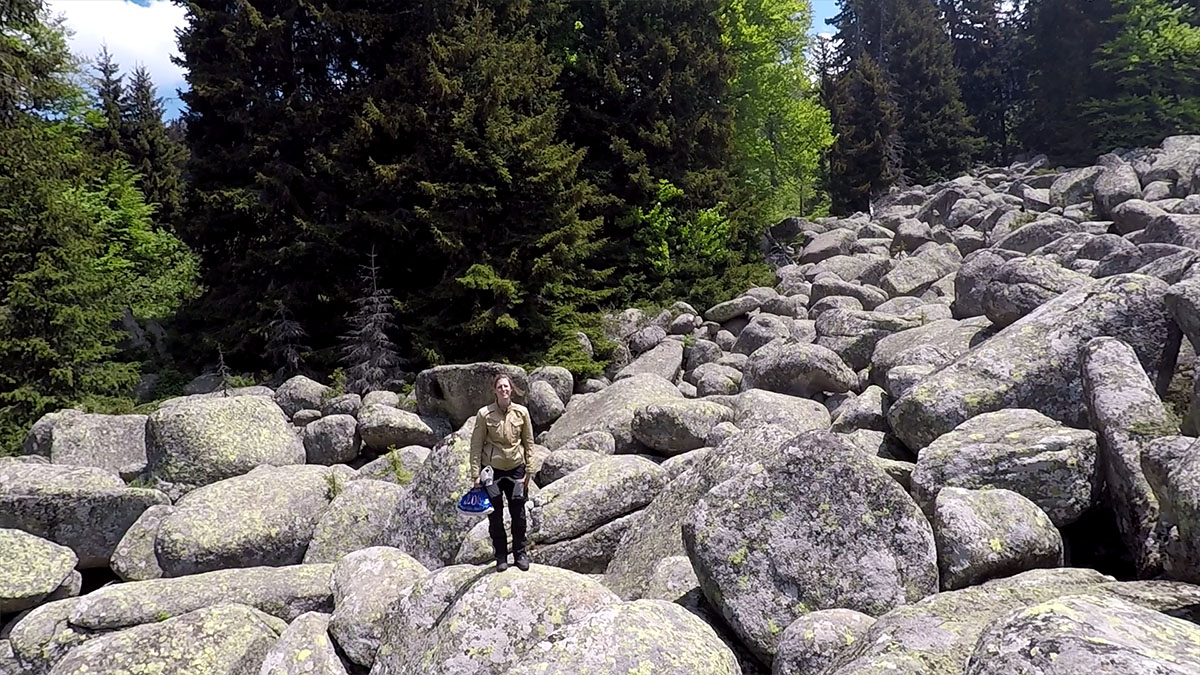 
The land of Israel is a sacred place and does not tolerate immoral behavior. It spews out inhabitants that defy the Torah's code of conduct. If Jews observed the Torah they would enjoy the land. If they grew lax in their observance, the Jewish state would be destroyed. This is precisely what happened when Babylon and later Rome destroyed the temple and exiled the people. Joshua sought to delay, if not postpone, that eventuality. The nature of the text inscribed on the tablets is a matter of sagacious dispute.

The Talmud taught that the entire biblical text was inscribed upon the tablets. The Talmud held that it was inscribed in all seventy languages of the day, but at least one Midrashic source indicates that it was inscribed only in Hebrew. Why were the tablets translated into seventy languages? Israel's neighboring tribes 9 argued that they were unfairly denied opportunity to embrace the Torah and with it, the right to live in the Holy Land. In response, the tablets 10 publicly displayed the Torah's teachings in all languages for the benefit of anyone who chose to read them.


The Talmud records a further debate on the method by which the tablets were plastered. Rabbi Shimon held that the letters were inscribed over the plaster. Rabbi Yehudah held that the letters were inscribed into the stone and a coat of lime was plastered over them. If the intention was to display the Torah's teachings to all mankind why were the letters, according to Rabbi Yehudah, concealed by a coat of lime? Because the Torah cannot be mastered out of idle curiosity. Forcing readers to chip away at the coat of lime before reading the text deterred the idle curious, but fortified the sincere seekers.

The stones were not designed to serve as permanent monuments. Our heritage is perpetuated by the power of our tradition, not by marble or granite monuments. Rather than erect monuments to our history, we prefer to live by our history. We possess a tradition so powerful that it alone suffices to perpetuate the memory of those ancient days that molded our nation's character. Indeed, lifeless monuments are anathema to our people; our prophets and kings rarely, if ever, resorted to them.

The stones may have been lost to history, but their message has lived on. The message, far more than the granite, was the legacy Joshua hoped to leave us. And in that he succeeded. Deuteronomy For a different view, see Ramban's commentary Nachmanides, R. Moshe Ben Nachman, Spain to this verse. Orach Chayim R.

Chaim Ibn Atar, Morocco, , on Deuteronomy goes even further. Citing Deuteronomy -6, he argues that the Jews inherited Israel due to no merit of their own, but because of the wickedness of the land's former inhabitants. The purpose of the monuments was to remind the Jews that if they kept the Torah and maintained a higher standard of behavior than did the former inhabitants, they would inherit the land on their own merits. Abraham ben Meir ibn Ezra, Spain, — Tosefta, Sotah, Ramban in his commentary to Deuteronomy , cites an ancient source and claims that the Hebrew letters were adorned with the same crowns that appear in today's Torah scroll.

He goes so far as to claim that the crowns in the script of the Torah scroll originated with these tablets. Rashi and Tosafot, Sotah 35b. The Talmud points out that the neighboring tribes sent scribes to transcribe the text from the tablets, but the tribes refused to accept these teaching and were therefore punished.

Revealing the mysterious river of stones

Tosafot points out that these claims could have been amply refuted by pointing out that before it was offered to the Jews, the Torah was offered to all the nations, but they refused it. Yet, Tosafot concludes that ignoring an extant text is more neglectful than rejecting a verbal offer for the Torah.

The Talmud Sotah 34a testifies that the stones were a measure of forty sa'ah an ancient weight measurement , the equivalent of roughly eighteen inches wide and four and a half feet high. Ramban Deuteronomy 3 states that fitting the entire text on twelve tablets of that size was nothing short of miraculous. Torat Moshe R. Moshe Alshich, Tzefat, in his commentary to Deuteronomy Maharal in Chidushei Agadot to Sotah 35b explained that the covering of the letters indicated that the Torah belongs primary to the Jewish nation.

Other nations are welcome to read the Torah, but it does not belong to them; hence the barrier. Samson Raphael Hirsch Frankfurt - in his commentary to Deuteronomy He posits this as a possible reason for Rabbi Shimon's position that the text was inscribed on a layer of lime. Joshua did not intend to leave the tablets as a permanent monument and chose to inscribe the letters upon lime because lime does not withstand the elements as stone does.

Please Donate. Please partner with Chabad. Thank you to:. Here's a great tip! Enter your email address to get our weekly email with fresh, exciting and thoughtful content that will enrich your inbox and your life. No Thanks. Subscribe Subscribe.

More in this section

Chabad Locator. Date Converter. The blue line was eventually bent into a right angle along the Wilkinson Turnpike, but it was not broken.

His stubbornness had robbed the Confederate assault of vital momentum. With his initial attack stalled and the Union army stubbornly keeping the field, Bragg decided to strike on the other side of the line at 10 A.


The focal point of this new effort was a small cedar copse known as the Round Forest. Only reluctantly did Breckinridge did send his units into the Round Forest at 4 P.

pay attention: a river of stones

On the 31st, Breckinridge relayed reports intimating that there was a large Federal force massing for an attack on the eastern side of Stones River. This was untrue, and would have been discredited if Breckinridge had conducted proper reconnaissance. This information was finally proved wrong late in the morning and Bragg ordered Breckinridge to join the main line on the western side of the river. Before Breckinridge redeployed, however, a courier arrived bearing word that another Union column was advancing east of the river. Breckinridge was halted again while this report was investigated and invalidated.

Bragg was only too willing to believe this news, and he confidently withheld a new assault and waited to take possession of an uncontested field. Instead, Rosecrans stayed in place and assembled fresh reinforcements. The armies spent January 1 dressing their lines and tending to their wounded. Rosecrans, now holding a tight position with both flanks joined to Stones River, decided to extend his flank across to the eastern bank.

Prelude to the Battle of Stones River

Bragg responded by ordering Breckinridge to charge and pulverize this new position. Breckinridge sent his men forward at 4 P.

source site Approximately 5, Confederates crossed half a mile of open field, torn from front and flank by massed artillery, and nearly broke the Union line in a desperate charge. The staggering losses at Stones River compelled both armies to spend months trying to regain their strength and come to terms with the causes of the winter bloodshed. His battle plan had achieved its objectives but not its goal—the Union army still held a strong defensive position.

Since neither side had swept the other from the field, the battle was a draw.


In the weeks that followed, however, it began to take the shape of a Union victory. Meanwhile, Bragg left 10, irreplaceable veterans in the cold cedar forests and became the target of ridicule from his lieutenants as he bottled himself up for months in Tullahoma. While the American Battlefield Trust has worked to protect Stones River, development continues to threaten this hallowed ground.

Click here to learn more about the Trust's ongoing preservation efforts. Show your pride in battlefield preservation by shopping in our store. Every purchase supports the mission. Skip to main content. Civil War. Quick Facts. December 31, January 2, Union artillery fire at Confederate troops during the Battle of Stones River.